Brian contacted me with a beautiful photograph of two goats on some rocks. Animals are something I tend to prefer to create in 3D, and rocks I struggle to capture in paint let alone felt. I put off the commission for a couple of weeks before sitting down one afternoon to attempt what I felt sure would be a failure.

An early evening return to Cemaes Bay to retrieve the flask we’d daftly left on a bench found us drinking the still warm coffee before heading off to collect a few snaps and memories. The light was beautiful, and so I found myself in soggy mud taking the shots which led to a couple of capturings in felt. At one point, as I focussed not only on the boats but on staying upright on the slippery muck of the harbour, a cat wound itself around my ankles and made itself my friend. Capturing boats is a strange one; their shape is never as you’d expect. I was really pleased when this finally seemed to come together.

This was inspired by a photograph taken by Sami Owen. I found her photograph whilst ‘surfing’ an online site devoted to all things beautiful in the scenery of Anglesey. She responded really favourably to my request to use her photo as inspiration, and I was humbled when she told me that she’d seen my work and was herself flattered that I’d chosen one of her shots. I’ve since found myself very drawn to her work. She has an amazing eye for capturing great beauty with a cute originality which then seems to find itself emulated by others…as I have done with this felt. Sami loved this outcome and bought an original felt ‘copy’ (not tautology); I couldn’t bring myself to sell the original, as I’d just hung it in my own collection; it acts as my window to the sea

I’m pretty pleased with my attempt to capture the views through the trees at Newborough Forest. This spot encapsulates why I chose to live on this island, long sandy beaches, beautiful woods and the ever-changing colours of the mountains as a backdrop to adventuring.

Inspired by the beautiful photography of Christine English. 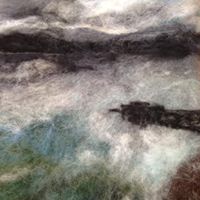 This felt overlooking Beaumaris Pier was created during the process of filming with the German-French tv company Arte.  Time over four days was spent in the company of Silvia, Rainer, Ole and Martin.  It was fantastic fun working with this team.

This is possibly my favourite piece.  It hangs in my lounge.  When I created it, I was working from a photograph on my computer screen, and not wearing my specs, so I was truly surprised, once I’d finished it, to find that there wasn’t actually one little cottage overlooking the estuary, there was a whole row of them.